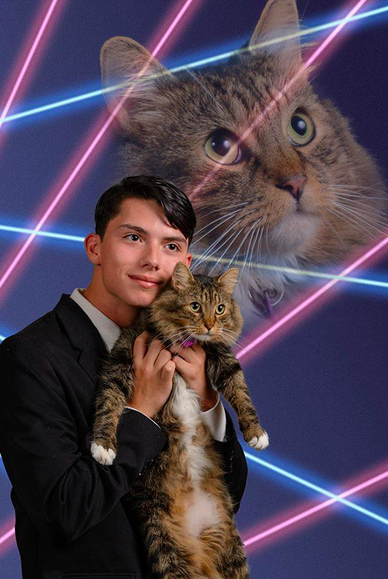 Recently, a senior at Schenectady High School in Schenectady, New York made headlines when he lobbied his school to allow a Napoleon Dynamite-esque picture of himself with his cat appear in the school yearbook.

Draven Rodriguez started an online petition in a pre-emptive move that eventually drew 6,000 signatures in support of the photo, which shows him holding his cat with pink and blue lasers in the background. Schenectady High School officials allowed the photo, but it hasn’t been the first media buzz to come up over a senior photo lately.

Back in May, San Francisco high school student Jessica Urbina wore a tuxedo in her senior photo, which officials at the private Catholic school said was against the school’s dress code policy and would be altered if it appeared.

Urbina’s classmates stood by her side and protested the school’s decision by wearing neckties and bowties to school. The protest prompted school officials to change their yearbook photo policy.

While most senior portraits are fairly standard and often anything but buzz-worthy, these two examples of senior portraits in the news bring up some good takeaways for seniors gearing up for their senior photo shoots.

Be yourself in your photos and don’t be afraid to incorporate things that are important to you. According to reports, Jessica wore male clothing all the time during school, so why not do so for her school photo? Just like students who compete in sports often pose in their photos with a soccer ball, or beauty pageant winners with their pageant sashes, why shouldn’t animal lovers pose with their cats (which in Draven’s case, was named Mr. Bigglesworth).