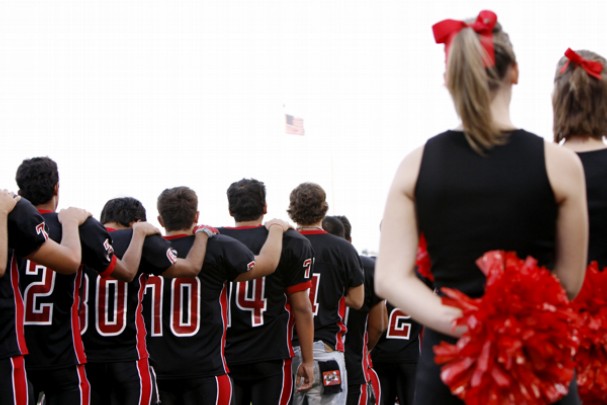 Fall is on the way and for most high schoolers the coming of a the season also signals the start of varsity football games. One telltale sign its game day: the football players and cheerleaders roam the halls school their respective athletic uniforms. But in schools in Florida, that’s changing.

At Countryside High School, located about 30 minutes outside Tampa, administrators are banning cheerleaders from wearing their uniforms to school on game day because they say the too-short skirts violate the school’s dress code.

The trend has apparently caught on, with high schools across the region joining in. While some schools are scrambling to make modifications to provide longer-length cheer skirts for game day and ensure that bare arms are covered, others are simply sticking with an outright ban. That’s not making fans of the cheerleaders who say the ban is denying them the opportunity to take part in one of the school’s longstanding traditions.

While the right to ‘bare arms’ and legs in this case, is causing a stir in Florida, it got us thinking about some of the other bans that have been put in place in schools around the globe. Here are just  a few of some of the stranger school bans.

Dodgeball – Maybe we should blame this on Ben Stiller and Vince Vaughn for bringing this sport into the spotlight in their popular film of the same name, but elementary and middles schools across the US are banning the sport saying it is getting too aggressive.  At the same time, the sport is becoming increasingly popular with college students and adults.

Red Ink – Schools in both Australia and the U.K. have apparently stopped using red to mark up papers because of the color’s “confrontational” nature. They are instead using green ink.

Best Friends – Kids growing up in the U.K. may not be able to boast about how they met their best friend in first grade because apparently some schools are banning children from making best friends to avoid hurt feelings. Instead, the schools are opting for children to play in large groups.

Yoga Pants – In a school in Ottawa, girls are not allowed to wear yoga pants unless they have a long shirt covering their backsides. School administrators are were worried about the tight fitting pants causing a distraction from studying.

Has your school instated any bans lately? Let us know.